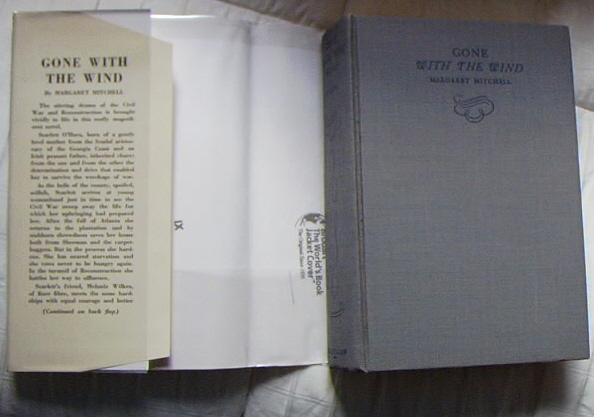 GONE WITH THE WIND

"GWTW is an indelible portrait of a unique time and place, American's greatest political and moral conflict, and the myths that surround it -- an all absorbing spectacle of a read even for postmodern readers. Mitchell vividly portrays the disillusionment and devastation of war, the ignorance of the uninitiated, and the transformation of arrogance into tenacity that shaped the first "new South." All the details of history and place come together as a rich backdrop for those unforgettable characters: shallow and selfish Scarlett, sincere Melanie, moony-eyed Ashley, and the sage, pragmatic, dashing, and rakish Rhett Butler--the most enduring heartthrob of American literature has produced. A monumental classic considered by many to be not only the greatest love story ever written, but also the greatest Civil War saga. Margaret Mitchell's Gone with the Wind is the bestselling novel of all time, and her unforgettable characters have become American icons. One of the most important books in American literary history, Mitchell's Civil War epic was a huge success when published, winning the Pulitzer prize for fiction. It's international renown was further enhanced by the film version starring Clark Gable and Vivien Leigh. very good JUNE PRINTING HARDCOVER (no other months listed)WITH NO MARKS AND NICE CLEAN COVER WITH 1936 JACKET WITH it's PRICE (UNCLIPPERD) WITH REVIEWS ON BACK PANEL. A VERY NICE EXAMPLE AND HARD TO FIND IN THIS CONDITION !

Title: GONE WITH THE WIND

GONE WITH THE WIND